Microsoft has disclosed the first details of Windows 10 – its next operating system (OS). The name is a surprise, bearing in mind it represents a jump from the last version – Windows 8. Reports BBC

The software will run on a wide range of devices, from phones and tablets to PCs and Xbox games consoles, with applications sold from a single store. It also marks the return of the Start Menu, which had been removed from Windows 8.

In addition to offering a list of the user’s favourite applications, the menu also brings up resizable tiles – similar to those featured in Windows 8’s touch-centric interface on PCs and tablets. These provide a quick view of notifications from relevant applications, such as details of new emails, Facebook messages and weather forecast updates.

The company said the facility was intended to make the software seem familiar to both users of Windows 8 and Windows 7.

The behaviour of the OS will depend on the type of device with which it is being used. Unlike its predecessor, users will not need to switch between Desktop Mode and the touch-focused alternative.

However, they can still spread a number of “live tiles” across the screens of two-in-one laptop-tablet hybrids to make them easier to use with both a mouse and finger presses.

Windows 8 had been criticised for being too different to the previous version, which deterred some organisations from introducing it. 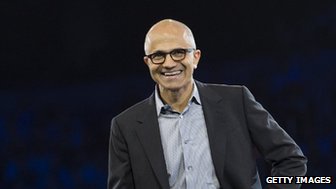 Microsoft’s chief executive, Satya Nadella, did not speak at the event, but had previously discussed a wish to “unify” Windows

It initially lacked a Start button altogether, and when one was introduced, it only switched to the touch-centric tiled interface or – if a long mouse press was used – provided access to the system’s control panel and other functions.

Businesses typically wait about a year after a new operating system’s release before offering it to workers, to give IT staff a chance to get to grips with the new technologies involved.

But it has been nearly two years since Windows 8 first went on sale and adoption is still low. “It’s extremely important for Microsoft to get Windows 10 right,” said David Johnson, who watches Microsoft for the consultancy Forrester.

“Windows 8 is only being offered to employees by about one in five organisations right now. Windows 7 is still the de facto standard for enterprise in the desktop environment. “For Microsoft to continue to be able to get the best and latest technology in the hands of the enterprise workforce all over the world, it has to have a vehicle to do that – and Windows 10 is its best shot.” 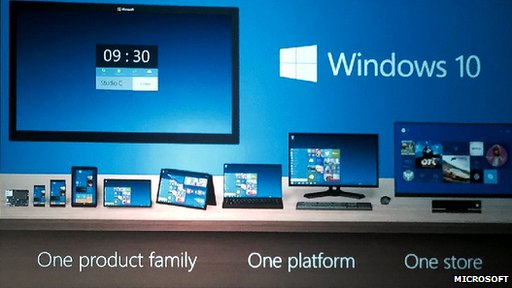 Microsoft said Windows 10 would work on devices with 4in (10.2cm) screens and 80in screens Across desktop PCs as a whole, only 13.4% currently run Windows 8 or Windows 8.1, according to research firm NetMarketshare.

By contrast, it says 51.2% are powered by Windows 7 and 23.9% by Windows XP, a version that is no longer supported by Microsoft. Mr Johnson said the reintroduction of the Start Menu should help Windows 10 fare better.

“It is critically important,” he said.

“The Start Menu is perhaps the most important thing that will make the desktop experience familiar to business users, and will help reduce resistance to its installation.”

Microsoft will offer a “technical preview” of Windows 10 to early adopters later this week, which will run on laptops and desktops. A release that will work on computer servers will follow. Read further