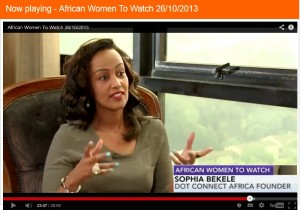 “Fearless, Competitive and Visionary Leaders of our time. We celebrate a new generation of African Women, closing the gender gap and shaping the continent’s political, social and economic landscape” says Bloomberg in its special TV Women to Watch
FOR IMMEDIATE RELEASE

PRLog (Press Release) – Nov. 15, 2013 – “Africa is blooming and this is the time to tell the Africa story from the African perspective”

, says Bloomberg TV Africa, which is avidly covering contemporary developments that are shaping the new and emerging Africa and producing a new TV Special “Women To Watch” which presents the stories and initiatives led by a new crop of “Inspiring, Visionary, African Women Leaders and Pioneers”.In its TV Special program, Bloomberg TV featured our own Sophia Bekele, who is Founder and Executive Director of DotConnectAfrica Trust along with Juliana Rotich as “two of Africa’s leading ladies in the ICT sector” presenting their stories in their prime TV program ,“African Women to Watch”.   Bekele talked about her ICT career journey and focused on her mission to help bridge the “digital divide” that currently exists between Africa and the developed countries.   She highlighted the fact that women are seriously under-represented within the ICT sector in Africa, as situation that has caused a clear ‘vacuum’ to exist in the African tech-space, which can be firmly addressed by empowering more women to take up leadership roles within the ICT industry.

Introducing Ms. Sophia Bekele as “a widely regarded authority on Internet and global technology”, Bloomberg TV credits her long and successful career and recent efforts by saying  “Bekele is well known for her ground breaking efforts to bridge Africa’s digital divide and will explain how she plans to establish the dotAfrica web domain through the DotConnectAfrica Campaign.

“Her vision is to promote and establish an African online identity building a viable governance structure that will operate the .africa domain integrating key African stakeholders”,Bloomberg TV explained

Ms. Bekele is recognized a a respected ICT entrepreneur and  leader in Africa, who has  overcome significant challenges in the tough African business and public sector terrain to take her place as a women pioneer.

What is most striking is that women like Sophia Bekele have earned their accolades based on individual achievements driven by strong work ethic and not because they have benefited from any official gender-focused affirmative action programs by African governments.

Her leadership efforts have been roundly acknowledged especially with the successful six year yes2dotAfrica campaign which she initiated that resulted in a significant shift towards a more positive global perception of Africa,  and a continent that is being recognized as an eminent peer for internet technology and not just a potential market, as well helped to enlarge Africa’s role and increase participation in matters of Global Internet Governance.

Sophia says that Africa has to rise now that it is no longer just a consumer.

”I think in terms of implementation and consumerism, to expand globally we need our partners we cannot do it alone, so from that perspective I’m very happy to see that global partnership is coming in”.

The ‘.africa’ registry is Africa’s strategic response to the ICANN Global Internet Expansion program, and Bekele’s own brain child, that she has relentlessly pursued by initiating it and promoting the efforts globally.  Despite some hurdles regarding the issues of accountability and unresolved matters with governmental interest in the .Africa geographic TLD, she has been able to sustain her stake in the African Internet DNS and ICT sector.  In her own words:

“this is my dream that Africa can boast among other continents as an able peer and leader, we don’t want to just be the market for global technologies, we want to lead from the front, after all Africa is the future and the future is now”.

In May 2013, Sophia Bekele was named as one of the Top “50 Trailblazers – Our future made in Africa“,  in a 60-page Special “Collector’s Edition” that was published by theinfluential UK’s NewAfrican Magazine, to coincide with the Organization of African Unity -African Union Golden Jubilee, 50th anniversary celebrations, that also featured individuals “who are realizing significant achievements in their specific field of endeavor” and who are “breaking ground, making Africa proud and propelling it into a future of great hope.”