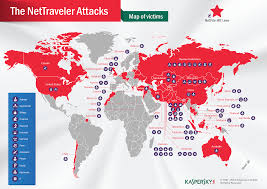 05 Dec 2013 Virus News Companies are increasingly falling victim to cyber-attacks. According to a recent survey conducted by Kaspersky Lab and B2B International, 91% of the organizations polled suffered a cyber-attack at least once in the preceding 12-month period, while 9% were the victims of targeted attacks – carefully planned activity aimed at infecting the network infrastructure of specific organization. And these are just self-estimated calculations. The extensive use of digital devices in business has created ideal conditions for cyber-espionage and the deployment of malware capable of stealing corporate data. The potential is so great that malicious programs may soon completely replace company insiders as the way of gathering information.

The main corporate findings of the year:

The parties concerned and the attackers’ goals

2013 saw some major disclosures about spyware-led attacks that were related, directly or indirectly, to the activities of various governments’ agencies. Other significant actors on the corporate cyber threat scene were businesses that turned to cybercriminals to penetrate their competitors’ networks.

Outsourced cybercriminal forces performed operations that were usually aimed at stealing information. Other attacks were based on sabotage – using malicious programs to wipe data or block infrastructure operations. Some special Trojan programs were capable of stealing money via online banking systems. Cybercriminals could also compromise corporate sites and redirect visitors to malicious resources, damaging a company’s reputation. Financial losses were caused by a DDoS attack, which can close down a company’s public-facing web resources for several days. Clients start looking for a more reliable company, which results in long-term financial losses.

“Mass distribution of malicious programs can affect any company, even a small commercial organization, resulting in the loss of money and intellectual property. Cybercriminals are continuously improving their malware, using unconventional approaches and solutions, from so-called encryptors and shredders that spread like the plague in a corporate environment, to an army of zombies that devours every available resource on web servers and data transfer networks. In 2013 we also fixed first case of targeting supply chains – not being able to reach big organizations, cybercriminals get their ‘weak point’, compromising contractors, as in the Icefog attacks”,

The rise of the cyber-mercenaries

Over the past few years, Kaspersky Lab’s experts have observed big and noisy APT gangs all over the world targeting large numbers of organizations from almost all sectors. They stayed in compromised networks for weeks and even months at a time, stealing every shred of information they could get. However, that approach stands less and less chance of going unnoticed for long, damaging their prospects of success. That’s why a new emerging trend is witnessed: small hit-and-run gangs that attack with surgical precision. They appear to know very well what they need from the victims. Basically, this kind of attackers come, steal what they want and leave. Kaspersky Lab’s experts have named them “cyber-mercenaries” – an organized group of people conducting cyber-espionage/cyber-sabotage activities on demand, following the orders of anyone who pays them.

Icefog, which was discovered this autumn, appears to be an example of this – an APT campaign in search of specifically required data. Manual analysis of the data stored in corporate networks was used with the help of remote-access technologies integrated into malware on infected workstations. Subsequently the cybercriminals selected and copied the documents that they wanted. Kaspersky Lab’s analysts expect this trend to grow in future, and more small groups of cyber-mercenaries will be available for hire to perform surgical hit-and-run operations.

The infamous disclosures of 2013 could potentially lead to a kind of de-globalization and greater interest in creating national equivalents of global services. Those new national software products and services delivered by local manufacturers may not be of the same quality as those of the larger international companies. The investigation of cyber-attacks suggests that the smaller and less experienced the software developer is, the more vulnerabilities will be found in its code. As a result targeted attacks become easier and more effective.

The full report is available on securelist.com