During the ICANN 50 Press Conference in London the ICANN president was fielding questions from Journalists, and in a demonstration of ICANN accountability process, Fadi Chehade, CEO of ICANN used .africa as an example that the ICANN process must be followed.    Reports Domainingafrica

The  .africa string was also a subject that has been mentioned quite severally during the ICANN 50 meeting that started from 22-26 June 2014, by the AUC and the competition losing patience over the ICANN process.

The ICANN president noted DotConnectAfrica’s  “right” to file for IRP stating that:

“Similarly the Africa where single applicant has filed an IRP she decided that this is her right and it her right and we should let her pursue her right even if the whole African Union has a different view her right is to say I don’t agree with the decision.”

Finally, by this very important affirmation of his commitment to the ICANN accounability process, ICANN should be able to respect the outcome of its own IRP on the .africa string.

You can watch the rest of the video below 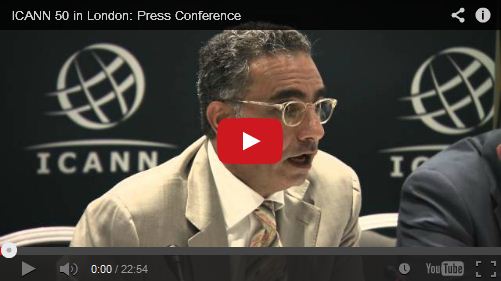