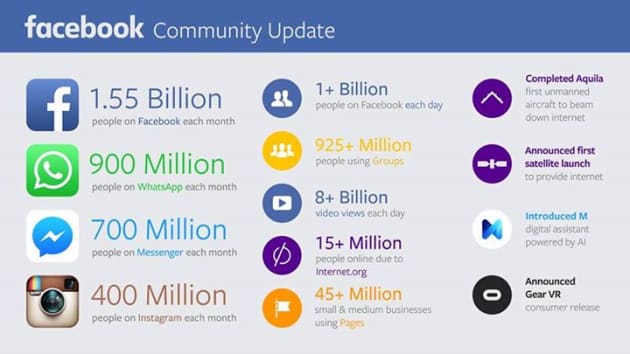 Facebook’s growth shows signs of rising daily. Facebook has announced that it has over one billion users on average using it everyday. In August it announced it had passed a milestone of having one billion users on the site in a single day. By the next month that was the average. That’s a year-over-year increase of 17 percent. Monthly active users increased by 14 percent to 1.55 billion as of the end of September, an increase of 14-percent from the year before. Meanwhile the company continues to see a majority (78-percent) of its ad revenue come from mobile. In the earnings statement CEO Mark Zuckerberg stated, “we’re focused on innovating and investing for the long term to serve our community and connect the entire world.” Reports by Roberto Baldwin

Facebook reported earnings on Wednesday that included more profit than had been expected at $0.57 per share and $4.5 billion in sales, besting estimates.

“We had a good quarter and got a lot done,” said Mark Zuckerberg, Facebook founder and CEO, in the earnings release. “We’re focused on innovating and investing for the long term to serve our community and connect the entire world.”

Facebook continued to add users, with 1.55 billion monthly active users, a 14% increase from the same period in 2015. Many of those users visit Facebook everyday. The social network said in its earnings release that it now sees a little more than 1 billion daily active users. Read more