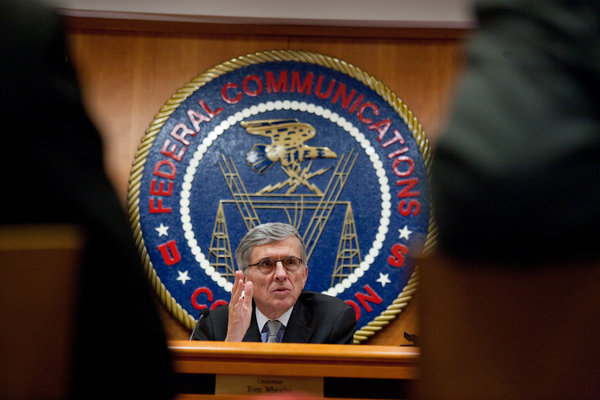 The proposed rules, drafted by Tom Wheeler, the chairman of the Federal Communications Commission, and his staff, would allow Internet service providers to charge companies different rates for faster connection speeds. Daniel Rosenbaum for The New York Times
By EDWARD WYATT April 23, 2014 for Ne

WASHINGTON — The principle that all Internet content should be treated equally as it flows through cables and pipes to consumers looks all but dead.

The Federal Communications Commission said on Wednesday that it would propose new rules that allow companies like Disney, Google or Netflix to pay Internet service providers like Comcast and Verizon for special, faster lanes to send video and other content to their customers.

The proposed changes would affect what is known as net neutrality — the idea that no providers of legal Internet content should face discrimination in providing offerings to consumers, and that users should have equal access to see any legal content they choose.

The proposal comes three months after a federal appeals court struck down, for the second time, agency rules intended to guarantee a free and open Internet.

Tom Wheeler, the F.C.C. chairman, defended the agency’s plans late Wednesday, saying speculation that the F.C.C. was “gutting the open Internet rule” is “flat out wrong.” Rather, he said, the new rules will provide for net neutrality along the lines of the appeals court’s decision.

Still, the regulations could radically reshape how Internet content is delivered to consumers. For example, if a gaming company cannot afford the fast track to players, customers could lose interest and its product could fail.

The rules are also likely to eventually raise prices as the likes of Disney and Netflix pass on to customers whatever they pay for the speedier lanes, which are the digital equivalent of an uncongested car pool lane on a busy freeway.

Consumer groups immediately attacked the proposal, saying that not only would costs rise, but also that big, rich companies with the money to pay large fees to Internet service providers would be favored over small start-ups with innovative business models — stifling the birth of the next Facebook or Twitter.

“If it goes forward, this capitulation will represent Washington at its worst,” said Todd O’Boyle, program director of Common Cause’s Media and Democracy Reform Initiative. “Americans were promised, and deserve, an Internet that is free of toll roads, fast lanes and censorship — corporate or governmental.”

If the new rules deliver anything less, he added, “that would be a betrayal.”

Mr. Wheeler rebuffed such criticism. “There is no ‘turnaround in policy,’ ” he said in a statement. “The same rules will apply to all Internet content. As with the original open Internet rules, and consistent with the court’s decision, behavior that harms consumers or competition will not be permitted.”

Broadband companies have pushed for the right to build special lanes. Verizon said during appeals court arguments that if it could make those kinds of deals, it would.

Under the proposal, broadband providers would have to disclose how they treat all Internet traffic and on what terms they offer more rapid lanes, and would be required to act “in a commercially reasonable manner,” agency officials said. That standard would be fleshed out as the agency seeks public comment.

The proposed rules would also require Internet service providers to disclose whether in assigning faster lanes, they have favored their affiliated companies that provide content. That could have significant implications for Comcast, the nation’s largest provider of high-speed Internet service, because it owns NBCUniversal.

Also, Comcast is asking for government permission to take over Time Warner Cable, the third-largest broadband provider, and opponents of the merger say that expanding its reach as a broadband company will give Comcast more incentive to favor its own content over that of unaffiliated programmers.

Mr. Wheeler has signaled for months that the federal appeals court decision striking down the earlier rules could force the commission to loosen its definitions of what constitutes an open Internet.

Those earlier rules effectively barred Internet service providers from making deals with services like Amazon or Netflix to allow those companies to pay to stream their products to viewers through a faster, express lane on the web. The court said that because the Internet is not considered a utility under federal law, it was not subject to that sort of regulation.

Opponents of the new proposed rules said they appeared to be full of holes, particularly in seeking to impose the “commercially reasonable” standard.

“The very essence of a ‘commercial reasonableness’ standard is discrimination,” Michael Weinberg, a vice president at Public Knowledge, a consumer advocacy group, said in a statement. “And the core of net neutrality is nondiscrimination.”

Mr. Weinberg added that the commission and courts had acknowledged that it could be commercially reasonable for a broadband provider to charge a content company higher rates for access to consumers because that company’s service was competitively threatening.

“This standard allows Internet service providers to impose a new price of entry for innovation on the Internet,” he said.

Consumers can pay Internet service providers for a higher-speed Internet connection. But whatever speed they choose, under the new rules, they might get some content faster, depending on what the content provider has paid for.

The fight over net neutrality has gone on for at least a decade, and is likely to continue at least until the F.C.C. settles on new rules. Each of the last two times the agency has written rules, one of the Internet service providers has taken it to court to have the rules invalidated.

If anything, lobbying over the details of the new net neutrality standard is likely to increase now that the federal court has provided a framework for the F.C.C. to work from as it fills in the specifics of its regulatory authority.

The proposed rules, drafted by Mr. Wheeler and his staff, will be circulated to the agency’s other four commissioners beginning on Thursday and will be released for public comment on May 15. They are likely to be put to a vote by the full commission by the end of the year.

News of the F.C.C. proposal was first reported online by The Wall Street Journal.