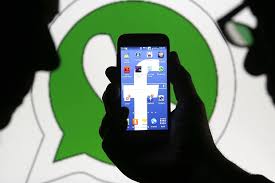 If you had any doubt about Facebook’s and Google’s intentions for the next five years, Facebook’s WhatsApp acquisition makes it clear: These Silicon Valley giants have no intention of remaining dependent on the caprices of the telcos.

In fact, we’re seeing the battle lines being drawn on what will be an epic business battle between telecommunications companies, which have controlled the Internet’s infrastructure for decades; and so-called “content” companies like Facebook and Google, which have been using that infrastructure to deliver their services to consumers.

Facebook was not willing to pay a record $19 billion for WhatsApp just because it’s a Twitter competitor, an SMS alternative, or a way to attract customers among youth in non-U.S. countries — though those are all significant.

The real reason Facebook was willing to pay so much is that WhatsApp represents a real threat to the carriers. That became clear earlier this week when WhatsApp unveiled its plans to offer voice calling within its app.

With voice calling capability, WhatsApp will let Facebook challenge telcos not only on mobile messaging but also for their bread and butter: phone calls.

And it wasn’t just Facebook. Google reportedly offered $10 billion for WhatsApp, which — if the company had accepted the offer — would have itself been a record price for a startup.

In other words, two big Silicon Valley companies were willing to pay top dollar for this company. My theory as to why: WhatsApp is the sharp point of a spear aimed directly at the heart of Comcast, Verizon, AT&T, and the like.

It starts with cutting into telco revenues. Farhad Manjoo’s analysis last week in the New York Times shows one slice of that picture: For the parents of SMS-obsessed teens, WhatsApp until recently represented a potentially huge savings — and a corresponding loss for the wireless carriers. That’s because it lets people use its free (or nearly free) service as an alternative to SMS text messaging, which used to cost as much as 20 cents per message or, with bulk messaging plans, $10 or $20 per month. If you’re trying to send texts across an ocean, the savings are even more significant. International SMS rates can still range from 20 cents to 50 cents per message, depending on the carrier and the destination.

But as Manjoo noted, carriers — at least in the U.S. — have had to reduce their SMS prices, and now offer unlimited texting with most of their plans. WhatsApp and similar texting apps have put pressure on the carriers, costing them tens of billions of dollars per year in SMS revenue worldwide.

Imagine a similar dynamic applied to the carriers’ voice business. Even though many smartphone-using technorati spend less than 3 percent of their time on these gadgets making phone calls, voice calling is still an enormous business for wireless carriers. Cutting into that revenue would hurt them, a lot.

Note: Lauren Wagner, who has contributed to VentureBeat in the past, has made similar points in a post on Medium.

Sure, you’ll still need an Internet connection for your phone to connect to WhatsApp’s servers — for now. And that brings me to the second point: Google is already looking to build its own Internet service alternatives to the telcos and wireless carriers, and if it’s smart, Facebook can’t be far behind.

The impending $45.2B merger of Comcast and Time Warner Cable (pending regulatory approval) will create a powerful near-monopoly with the capability to reach a vast percentage of U.S. households, and very few credible competitive alternatives. (Dish Network? Please.)

At the same time, federal courts have ruled that the FCC, under current rules, does not have the right to enforce “network neutrality” principles that would prevent carriers from selectively privileging one content provider’s content over another’s.

It’s no coincidence that within a few weeks of these two developments, Netflix struck a deal with Comcast to ensure that its movies reach its customers at high speed and high definition. It’s making a deal now because it sees the writing on the wall: Comcast will soon be able to charge companies like Netflix whatever it wants. If their businesses depend on streaming media, and they want their customers’ experience to be good, they’ll make the deal with Comcast, even if it’s costly.

But for a deep-pocketed company like Google has an alternative to making a deal with Comcast: Routing around it. That’s why Google is experimenting with its own high-speed Google Fiber deployments, first in Kansas City but soon in many other cities.

And for wireless coverage, it’s even considering high-altitude balloons that could blanket large areas of the Earth with wireless Internet connectivity through its well-named Project Loon.

Facebook hasn’t announced any plans to build its own Internet infrastructure (apart from Open Compute, its open-source plan for building low-power datacenters), but the company’s founder and chief executive, Mark Zuckerberg, did say earlier this week that he wished mobile carriers would just give away free Internet access in developing countries.

Of course he wants that: With free Internet access and the free — or nearly free — WhatsApp voice calling, Facebook would be able to offer almost everything that carriers used to.

Facebook’s nonprofit, Internet.org, looks like a feel-good plea to extend Internet access to those who most need it — and it may be that. (Samsung and Nokia are also backing the initiative.) But it’s also a clever ploy, because wireless carriers represent an enormous middleman standing between Zuckerberg and his customers. If he can rally public opinion behind Internet.org’s noble aims, it makes Facebook look good while putting carriers in the position of giving away their services for free — or else looking greedy and miserly.

In the end, Facebook and Google would be much happier if they didn’t have to depend on wired and wireless companies to connect them with consumers. They’re taking different paths toward carrier independence, but their goal appears to be very similar.

So is it any wonder that both companies were willing to pay top dollar for WhatsApp? Source